(Part 2 in a series about Trotsky’s lies, falsehoods & flip-flops.)

TROTSKY & THE THEORY OF SOCIAL-FASCISM

“(T)he Cominterm bureaucracy, together with social-democracy, is doing everything it possibly can to transform Europe, in fact the entire world, into a fascist concentration camp.”
–Trotsky, (Que signifie la capitulation de Rakovsky? 31 March 1934. La lutte, pp. 59—60)

However, Trotsky also went on to blame the Comintern for “not creating a united front” with Social-Democracy. The Communist International maintained that Social-Democrats in power made concessions to fascism while crushing the workers and were therefore unreliable allies. Trotsky attacked this theory, while only a little time ago he had accused Social-Democracy of the same exact thing:

“The policy of a united front of the workers against fascism flows from this situation. It opens up tremendous possibilities to the Communist Party. A condition for success, however, is the rejection of the theory and practice of “social fascism”, the harm of which becomes a positive measure under the present circumstances.”
–Trotsky, Fascism: What it is and how to fight it 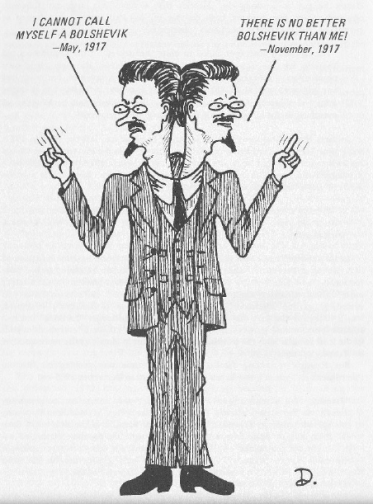 TROTSKY’S FIGHT AGAINST THE POPULAR FRONT IN SPAIN

“Two irreconcilable programs thus confronted each other on the territory of republican Spain. On the one hand, the program of saving at any cost private property from the proletariat, and saving as far as possible democracy from Franco; on the other hand, the program of abolishing private property through the conquest of power by the proletariat. The first program expressed the interest of capitalism through the medium of the labor aristocracy, the top petty-bourgeois circles, and especially the Soviet bureaucracy… between the handful of Bolsheviks and the revolutionary proletariat stood counter-revolutionary wall of the Popular Front.”
–Trotsky, The Lessons of Spain: The Last Warning

While demanding unity with the Social-Fascist Trotsky at the same time attacked genuine anti-fascist unity in Spain. Trotsky ridiculed the notion of an anti-fascist alliance, saying it was philistinism. He attacked those Communists & Anarchists who united together:

“But “democratic” philistines – including Stalinists, Socialists, and Anarchists – regard the civil war of the bourgeoisie against the proletariat, even in areas most closely adjoining the front, as a natural and inescapable war, having as its tasks the safeguarding of the “unity of the Popular Front.” On the other hand, the civil war of the proletariat against the “republican” counterrevolution is, in the eyes of the same philistines, a criminal, “fascists,” Trotskyist war, disrupting … “the unity of the anti-fascist forces.””
–Trotsky, Ibid.

TROTSKY’S STRUGGLE AGAINST THE UNITED FRONT IN CHINA

“The official leadership of the Chinese revolution has been oriented all this time on a “general national united front” or on the “bloc of four classes”… the big bourgeoisie leads the petty-bourgeois democrats, the phrase-mongers of the national united front, behind it, and the latter, in turn, confuse the workers and drag them along behind the bourgeoisie…”
–Trotsky, The Chinese Revolution and the Theses of Comrade Stalin

“The Bolshevik way, however, consists of an unconditional political and organizational demarcation from the bourgeoisie, of a relentless exposure of the bourgeoisie from the very first steps of the revolution, of a destruction of all petty-bourgeois illusions about the united front with the bourgeoisie”
–Trotsky, Ibid.

Trotsky like the typical ultra-leftist condemned the united front of anti-feudal elements. The KMT however changed in its character after Sun Yat Sen’s death. Being originally a petit-bourgeois party of the peasants it now became a party of landlords & compradors. The KMT betrayed the communists and attacked them. Trotsky jumped with joy as this could be used as a political weapon against united fronts.

Of course, the real mistake of the Chinese & Soviet Communists was not seeing the change in the KMT, not the fact they had collaborated in the past. Trotsky however ignores this in his propaganda.

After the joint campaign against feudalism & the warlords, the KMT & the Communists now fought for power in the Chinese civil war. The story of the United Front in China becomes more complicated still. After the invasion of Japan into China the Communists demanded a halt in the civil-war and the creation of an anti-Japanese United Front of all patriotic elements. Trotsky had previously ridiculed Stalin’s thesis of isolating the right-wing of the KMT and working with the followers of Sun Yat Sen’s program. This is exactly what Mao Tse-Tung proposed.

Mao demanded an Anti-Japanese United Front but the right-wing faction of the KMT was opposed to this view. They in fact rather supported Japanese imperialism then the independence of their own country. This isolated them from the Chinese masses and caused a rift inside their own party. The KMT eventually agreed to a half-hearted collaboration against Japan but in the eyes of the masses they were traitors. The KMT became the party of compradors, imperialist puppets and the richest most corrupt bourgeois and landlords. The Communists gained the status of the party of the masses, of the peasantry and patriotic forces. This United Front was not lagging behind the bourgeois like Trotsky asserted, it was led by the Proletariat, by the Communists.

Uniting maximum force against the main target proved successful as did the thesis of isolating the right-wing.

Trotsky’s theory & praxis is utterly inconsistent on the issue of the United Front. One day he condemns the Leninists for building one, while the next he condemns them for not building one! He accused social-democracy of helping fascism while he also called for unity with social-fascism. Trotsky attacked the Chinese for “lagging behind the bourgeois” when they in reality overthrew the bourgeois. In Spain Trotsky demanded a militant struggle against the anti-fascist United Front.

Trotsky’s actions are not merely ultra-left. They are more then that. They are opportunism pure and simple. Opportunism to the right & to the “left”, which ever suited his purpose.