(or, How to better understand the Relation between Base & Superstructure)

Unfortunately it is assumed by some Marxists that Socialism, almost automatically solves issues like sexism, racism, transphobia & homophobia. People who hold this mistaken view argue: “These issues cannot be solved in capitalism, so let’s not focus on them now, it will all be solved in Socialism.”

There is a tactical component to this question which I will discuss at the end. First I want to cover the assumption that Socialism solves these, inequalities, oppressions, ills of capitalism automatically, or almost automatically. This mistaken view derives from an incorrect understanding of the Base and the Superstructure & their relation.

WHAT ARE THE BASE AND THE SUPERSTRUCTURE?

In A Contribution to the Critique of Political Economy Marx describes this economic underlying ‘base’ as follows:

“…on which arises a legal and political superstructure and to which correspond definite forms of social consciousness.”

So what is this superstructure? The superstructure consists of things like culture, religion,  form of government such as parliamentarism, military dictatorship or monarchism.

Later on Marx describes the basic relation between the base & superstructure:

“The changes in the economic foundation lead sooner or later to the transformation of the whole immense superstructure.”

This has led some to hold the incorrect view, that replacing a capitalist economic system with a socialist one, will automatically or practically automatically or very easily, get rid of all the oppressive and reactionary elements arising from the old capitalist society.

Let us now examine the notion that the destruction of the capitalist economic base will by itself alone quickly & easily get rid of the reactionary culture fostered by capitalism. When Marxist-Leninist states were in existence, did they cure all these ills? We know the answer. Racism and sexism still remained though in a more limited form.

What Marxist-Leninist countries did do was implement policies such as granting equal legal & democratic rights to women as well as ethnic and religious minorities. They provided equal opportunities to study and work for all people regardless of sex or race. The socialist media portrayed minorities as equally capable members of society,  the education system tried to combat sexist, racist and other bourgeois-conservative views.

These advances were a necessary outcome of the new society that was being built. Socialism couldn’t have been built without at the same time combating the most glaring and most vicious examples of bourgeois-conservative ideology and culture. They were in one sense a result of the objective factors.

However there was nothing “automatic” or “easy” in this process, as would be implied by the “don’t worry, it will all be taken care of in socialism” type of attitude. These achievements were necessitated by the new economic system, but they were implemented by conscious policies by people. In this sense, they were also a result of the subjective factors, the people, the activists, members of the oppressed groups etc.

THE ROOT OF THE PROBLEM

The mistake of the “automatic” or “we will take care of it in socialism” theory is the following:

Although the capitalist base is what created and maintained the reactionary superstructure of sexism, racism, transphobia etc. the remnants of the old superstructure can still survive in a limited form for quite some time even in a new base. Especially as this base is constantly itself changing and transitioning away from the old towards something new. To think that these issues will be solved quickly and easily is naive hubris.

It took capitalism an extraordinarily long time to wipe out most remnants of feudal culture. There are still many constitutional monarchies in the world, where the economy is entirely capitalist and the crown has been stripped of power, yet the ridiculous cultural remnant of monarchist absolutism is still there.

Those aspects of feudalism which most strikingly hindered the growing bourgeoisie came into such violent conflict with the new capitalist system that they were eliminated much faster. Aspects like aristocratic privileges, Monarchist absolutism, absolute rule of the clergy, various feudal restrictions of banking, trade and other capitalistic activities. As a result the corresponding ideological-cultural superstructure, began to die out.

With the changes in the economic base the ruling feudal ideology began to be replaced by capitalist ideology. Feudalism was no longer seen as man’s natural state, instead man’s nature was proclaimed to be capitalistic. Religion lost much of its influence, the Divine right of the king crumbled into dust, replaced by the wealthy bourgeois politician.

This didn’t always happen in a simply linear fashion at all. The French Revolution overthrew feudal absolutism but the Napoleonic reaction managed to restore it, however while still releasing the economy from feudal shackles for capitalism to develop more freely.

In many capitalist countries up until a 100 years ago Monarchism & many feudal aspects still held influence. Finland still had clerical & aristocrat privileges and the church acted like a giant feudal landlord. The Russian Empire was another good example where capitalism was evidently there existing side by side with blatant feudalism. This is what Marxists later termed “semi-feudalism”.

Those aspects of the old feudal order which were less restricting for capitalism remained for a long time and died out only slowly, adapting themselves or even being co-opted by specific subjective forces in the capitalist order e.g. religious or conservative anti-communist propaganda. Similarly, while the Socialist States quickly stamped out the most egregious ills of capitalism, remnants still managed to survive and sometimes the people of those states were even unaware of this. It takes both the necessary objective conditions of the new society as well as conscious work by the subjective forces: the people, to achieve liberation and rid ourselves of sexism, racism, transphobia, homophobia and other ills of capitalism.

The tactical question of the matter essentially boils down to the question: “Revolution or Reform?”

The advocates of the theory of “we will fix it later in socialism” hold their view because they have a mistaken understanding of Marxist-Leninist theory. They have a one-sided view that exaggerates the danger of reformism. They want working class revolution, and see all other struggles as secondary and fundamentally reformist. This is a dangerous error. Such thinking isolates the Communists from the masses. The struggles of oppressed people are not secondary but deeply intertwined with the working class struggle.

1. Are questions of race, sex, etc. secondary to class?

Lenin could have been a dogmatist and said that the Peasant Question, Women’s Question or National Question are secondary and unimportant. But why didn’t he?

Because women are approximately half the population, our work depends on women. Because the vast majority of the Russian population were poor toiling peasants, it would have been inconceivable to succeed without them. Because the Russian Empire was a prison house of nations, it was inconceivable to build a socialist society based on trust, equality and co-operation without granting full rights to national minorities. Without such a policy, this wouldn’t have been a project of fraternity but of subjugation.

2. The question of our alliance with oppressed minorities

The relatively small number of LGBT & trans people has made their struggle far more difficult and probably has contributed to it only being recognize so late. That said, isolating ourselves from LGBT & trans organizations because of their alleged “reformism” only hinders our movement and reduces its allies & forces. By the fact that they are oppressed, they belong to our movement. By the simple fact that we want true equality for all, their goal is the same as ours.

Some might argue, that because the number of LGBT & trans people is so small their chances of playing the crucial role is smaller. A popular movement without women is doomed to fail, but a movement that is missing a small minority, can still succeed. For the sake of argument let us assume this is correct: why should we deny ourselves this beneficial alliance even if it were possible to win without it? There is no good reason for it.

The same question applies to some very small national groups. Someone might argue that they are so few, that in the nationwide scheme they are not the deciding factor, but why deny ourselves this ally? All oppressed people are our allies.

Their number may be small but this probably doesn’t give a fair representation of their influence. There is reason to believe that oppressed people are more prone to Revolution & political activism, and this should be worthy of consideration for us.

Some people will to a varying degree argue explicitly (or more often implicitly) that the women’s movement, anti-racist movements, trans or LGBT movements are at the end of the day reformist in character and therefore not of any use for us, or worthy of our support.

Certainly there are reformist tendencies, in fact most non-communists are reformists. Liberals, social-democrats and all those who think that sexism, transphobia, homophobia and racism can be solved in the context of capitalism are by definition reformists. But what kind of a “mass movement” can we hope to become if we isolate ourselves from the masses because they are not communists?

These “reformist” movements should more accurately be termed “spontaneous” movements. Their problem is not principled dedication to reformist tactics, but a lack of class and political consciousness. They lack an understanding of the underlying causes of their oppression and act unconsciously, which results typically in reformist actions. The cure for unconscious action is political education. We should be eager to hear the complaints and grievances of the masses, and the experience to be learned from them. Likewise the masses are eager for political knowledge and better organizational forms – the fact that they are organizing themselves is proof of that.

The real reformist danger lies elsewhere. The real danger lies in semi-conscious political groups, even communist groups which take the opposite kind of one-sided approach. Groups that spend all their time focusing on issues which only impact a tiny minority. They neglect work towards working class revolution in favor of reformist actions, to fix capitalism for the oppressed groups. This task is doomed to fail as capitalism cannot be made something that it is not. Capitalism cannot be made into a fair & equal system.

Such movements are either outright liberal or simply have accepted liberal idealist political theory to such a degree that they look more like a liberal then a genuinely leftist organization. They serve neither the working class or other oppressed groups. Their work only serves capitalism as it hinders any real change. They should be exposed and criticized but the existence of such groups should not lead us to the wrong and one-sided view that rejects our work with oppressed groups, our alliance with them, us recruiting them into our ranks. 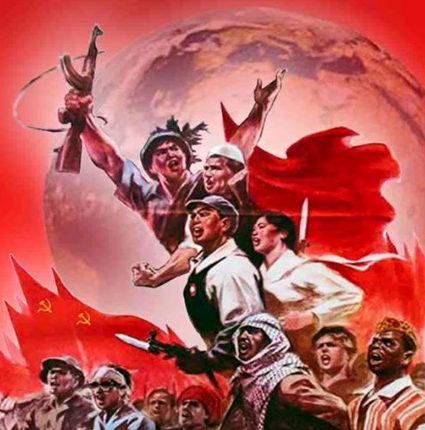 5 thoughts on “How Does Socialism Solve Racism, Sexism & Other Oppression?”